Brittney Badger in her flickr set, dissects household appliances, places them in beautiful patterns on a white background and photographs them. This was one of her college projects. Just Beautiful. See here for more of her gadgets inside-out.

Today I want to share a very cool piece of info, that I learnt yesterday. The days I get home early, I get to see Vijay TV’s Bhakthi program series. Some very interesting stories. All told by very well versed people. There is one gentleman who is talking about Abirami Andhadhi, and he was explaining the meaning of the name – Abirami. He split up Abirami into Abi – ramya == Now beautiful. He was explaining as to how, the Goddess is ‘Now beautiful’ always. I think that is a pretty cool thing. The ultimate example of ‘living for the present’.

For the theologically inclined – you may recognize Abirami as the Goddess of fame at Thirukadayur – and the story of Abirama battar. The battar was once meditating, entranced by the Goddess in Bhakti. The then king decided to test the battar, and asked what day it was ; and in a whim, Abirama Battar says, it is a full moon day (whereas, in actuality, it was the new moon day). As the evening approaches, Abirama battar starts composing and reciting Abirami Andhaadi, a collection of 100 verses. Towards the end, the Goddess comes to the rescue of her devotee, by tossing her nose ring (ear-ring?) on the sky, and the king sees it as the moon itself. The king realizes his mistake of doubting the battar, and asks for forgiveness.

For the naasthikally inclined (non-theological) – you may recognize Abirami as the name that Kamal keeps on mumbling in the movie Guna. Abiraaami Abiraaami.

Update: On recommendation from the CHO (chief home officer) — explanation of what andhaadi is, is also important. Andhaadis have a common feature – Each verse starts with the word in which the previous verse ends. That is pretty cool in its own right.

Krishna jayanthi (aka gokulashtami) was celebrated with great gusto at home yesterday. Lord Krishna is my wife’s favourite God in the Hindu Pantheon. She considers this God as ‘her friend’ :).

The Bhagirathi roars down the Garhwal Himalayas. This is about 50 feet from the GMVN resthouse where we stayed.

Varalakshmi vritham was celebrated with all pomp and glory at home yesterday. For more on this festival check out the wikipedia page.

It was a beautiful misty morning on Thursday, when I went to pick up my parents from the Bangalore Railway station. The mysore side of the station offers some very good loco-viewing angles. Ok, now you get the gist. I get very excited when I see locomotives 🙂 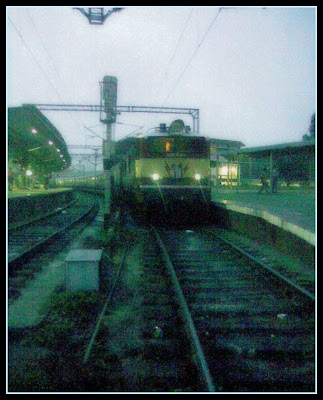 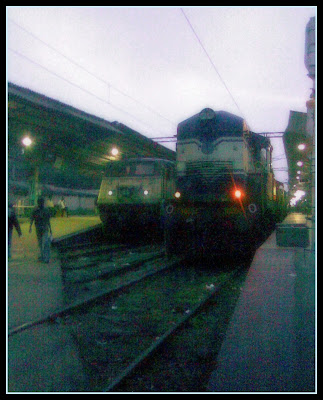 (I wish I had a camera phone with a better resolution or I wish I had taken my dig camera with me).

By far the best Dilbert strip, I have ever read.

I fell off the chair laughing, when I read the following in an article in the NYTimes.

“It’s different than what I remember from last year, in that the pollution looked more yellow and dark,” Shoemaker said. “It’s whiter this year. I think it’s a combination of a different time of year and little bit more mist and humidity in the air. So it doesn’t look as bad, but you can still kind of taste it.”

On a more serious note, I think the colour of the pollution is white/grey like everywhere.

There is something magical about the taste of Milk bikis dipped in Coffee and eaten. Hmm. The otherwise drap taste of the biscuit becomes brilliantly better. Biting into the succulent biscuit is just nirvana. Ahem, let me stop before I sink more into soliloqui.

PS: The same taste is there with Milk Bikis dipped in tea as well – but can be rated a close second. Coffee beats the tea in taste.

If you are dedicated enough, and if you decide to put to action, what your mind has conjured up.