I have been a strong fan of non-Microsoft browsers/email clients for quite some time now. I switched to firefox long time ago, and I recently switched to thunderbird.

But it just bit me where it hurts two days ago. These guys are still not fully stable yet. MS might have bugs, but it is fairly stable as far as the normal end user is concerned.

Browser: I missed out on a nice airline fare, because firefox was not supported by the website. I did not even realize it. I had to book a flight from Delhi to Chennai. I chose my Origin as Delhi, and the only thing that the destination drop down box showed was Mumbai. So I thought, this airline did not fly to Chennai. Well, get this. The airline does. When the website is opened in IE, the destionation drop down box shows a list of 8 cities ! Well my ‘trusty firefox’ had given up on me.
So I am now left in a quandary. Is it worth it to hold on Mozilla/Firefox, just because of some nice fancy user-friendly-hacks like tabs or extensions ? I dont know ……

Email client: (1) I almost sent out an email to a wrong person the other day. The reason, Thunderbird believed that the name that matched the local directory is more apt than our LDAP configured one (or even the one in the To: box). Yes, it does get complicated when we have two people with exactly the same names in different departments in our company. (2) TB did not show me new emails in a certain folder until I went and clicked this. I noticed this yesterday when I saw a “You have new email” thingie pop out at corner of my screen, but I did not see any new email ? The email had been filtered to a folder, which did not show up *bold*. I went and clicked on the folder, and voila, it becomes *bold* and shows me 5 new messages !

Outlook has never done this to me (in the little time I have used Outlook). ‘Pine’ ofcourse has never ever done this to me. But I, with great sorrow, gave up pine recently, because some of my new managerial responsibility is getting me to receive so much email, that I need some nicer gooey-er way of handling email.

Again same question: Is it worth it to hang on to TB, just because it does not store its mail folders in any proprietary format (it stores it in MBX format, which is txt friendly). I dont know again …

For once I agree with the government. Oh my God, it has been a long time since I said that.

I first read this paragraph:

The case for giving a computer to every single child is pedagogically suspect. It may actually be detrimental to the growth of the creative and analytical abilities of the child,” Education Secretary Sudeep Banerjee told a planning commission.

I was like, Oh no, not another beurocrat making a bad decision. Then came the surprise:

. “We cannot visualise a situation for decades when we can go beyond the pilot stage. We need classrooms and teachers more urgently than fancy tools,” said Banerjee.

I cannot agree more on this. Hat tip to Mr. Banerjee. 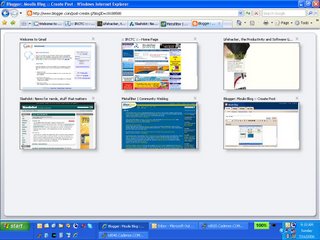 I downloaded and installed the latest and greatest IE7 Beta. It is still in Beta. However, it does look like the Redmond folks are paying close attention to competing browsers. IE7 has tabbed browsing (very cool), a very clean no-clutter interface, and most interesting of all, it has a tab-thumbnail preview (very very cool). Download and check out IE7.

Jason, from blackbeltproductivity, has covered an often neglected topic, in a short and sweet post. He covers what you should do, before you have a 1-1 with your leader. It is incredibly important, you prepare for a 1-1. I have very recently noticed this. I actually write down bullets that I want to cover with my boss, before my 1-1. This defenitely helps. One, the boss feels good that, the 1-1 is productive. The second, sometimes the 1-1s just finish faster. Often times, before I have noticed that I waste a lot of time in the 1-1 itself trying to remember something that I wanted to talk about.

I just cannot stop grinning from ear to ear. Just read this post on the gadget blog on how to make your own USB Teddy. What is a USB teddy you say. Well, it is a small teddy bear stuffed toy, with a USB drive stuck in it ofcourse.

You take the teddy. Chop its head off. Insert the USB drive, suture the wound.

Read the full article here. You need to see the second picture . I guarantee, you cannot stop the grinning either.

Chris Brogan from Lifehack.org has a great writeup on how to design a good work flow. At some points, it does seem too good to be true. But then isnt every productivity system supposed to tend to ‘Utopia’. He gives a good list of online tools, which can be used to sharpen your workflow, and how to get ‘maximum’ work done. [link]